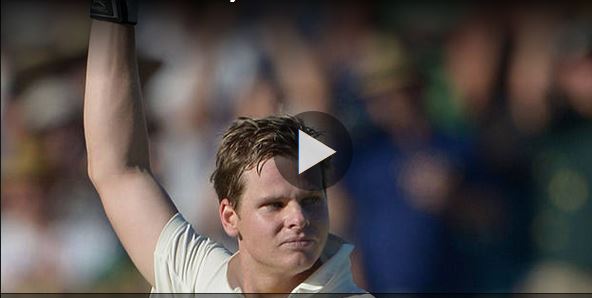 Chris Rogers and Steve Smith have both hit centuries on day one at Lord's, as Australia piled on the runs to take control of the second Test.

The Aussies are in a commanding position after posting a score of 1-337 at stumps on day one.

Opener Chris Rogers finally notched a ton, after scoring seven 50s in his last eight innings, to finish the day on 158 not out, while the in-form Steve Smith finished on 129 not out.

Australian captain Michael Clarke won the toss and elected to bat on a flat, batsman friendly wicket. Rogers was given a life on naught after being dropped in a difficult chance at slip when he edged a wide delivery from Anderson. Much like when Joe Root when dropped before getting off the mark at Cardiff, the Aussie opener made the opposition pay, quickly settling in on one of his favourite grounds, before playing some exquisite cover drives on his way to an unbeaten century.

Australia made a strong start after Rogers' lifeline, before Warner played a rash shot trying to hit Moeen Ali over the rope. Warner mistimed his slog and was caught in the deep by Anderson for 38, after seemingly being set before throwing his wicket away in disappointing fashion.

It was the only blemish for Australia, who then hardly gave England a sniff for the rest of the day, in what was the first time since Headingley in 1993 that England has only managed to take one Australian wicket in a full day of Test cricket.

No. 3 batsman Steve Smith got off to a slow start as he poked and prodded the ball around for singles early in his innings to get his eye in. However, once he did, he played with the same ease and class that has seen him rise to the No. 1 batsman in the world over the past 12 months. However, he did give England half a chance, when he edged a ball to Ian Bell at slip, who dropped a difficult low attempt when Smith was on 51.

The unbeaten 259 run stand is the highest second wicket stand by an Australian pair at Lord's since Don Bradman and Bill Woodfull made 231 in 1930.

Australia will look for add further pain on England on day two as they look to score over 500 to set an imposing first innings lead.

England will need several early wickets on day two if they want to have any chance of saving this Test match.