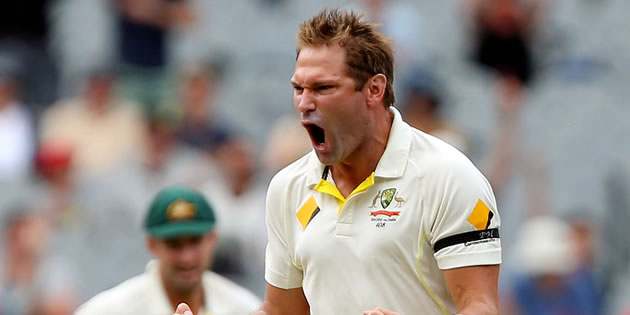 Ryan Harris was a late starter to Test cricket, but he demonstrated time and again he could be a force on the big stage for Australia.

He was 30 when he made his Test debut in March 2010 against New Zealand and he went on to take 113 wickets in 27 matches before he announced his shock retirement due to a persistent knee injury.

England will be delighted to see the back of Harris, who took 57 wickets in 12 Ashes matches against Australia’s biggest rivals. Harris’ absence from the 2015 Ashes also means having a bet on cricket on Australia’s leading wicket taker requires a rethink.

In recognition of Harris’ regular tormenting of England’s batsmen, we look at three of his best bowling performances against the old enemy:

Harris helped Australia to level up the series by taking nine wickets in the match, including six in England’s second innings as his side won by 267 runs. Australia’s 268 in the first innings was nothing special, but England were unable to get close to that total. Harris took the wickets of their leading scorers – Andrew Strauss and Ian Bell – with Graeme Swann falling in between.

Chasing an unlikely victory, England were quickly on the back foot as Harris trapped Alistair Cook lbw for the opening wicket. Then, in a devastating spell of bowling during the opening 10 overs of the fourth morning, Harris spearheaded Australia’s stunning win. He dismissed Paul Collingwood, nightwatchman Jimmy Anderson, Ian Bell again, Matt Prior and Steven Finn as England were all out for just 123. Harris finished with figures of 6-47.

Harris recorded his best Test figures of 7-117 in the second innings, but it wasn’t enough to spare Australia from defeat as England won the Fourth Test to also win the series. Australia had appeared to be in control of the match as Harris claimed the wickets of Broad and Swann as England managed just 238. He then scored 28 in Australia’s first innings total of 270. Harris’ dominant bowling performance had England in trouble at 49-3 in the second innings as he took the wickets of Joe Root, Alistair Cook and Jonathan Trott. Bell, though, compiled a century before Harris bowled him out and then took the wicket of Prior with his next ball. Broad and Tim Bresnan were also dismissed by Harris as England made 330. But Australia collapsed in their second innings to lose by 74 runs.

The Ashes had long since been regained by Australia by the time of the final Test in Sydney, but Harris produced a devastating spell of bowling in the second innings to ensure a series whitewash. Harris made an early contribution in England’s first innings as he took the wickets of Cook and Kevin Pietersen to leave the tourists on 17-4. Bell once again succumbed to the bowling of Harris in the second innings and Pietersen was also seen off by the wily veteran’s pace and swing. Ben Stokes and Broad both offered some resistance for England, but were eventually undone by Harris. And, two balls after Broad had gone, Harris finished off the innings by taking the wicket of Boyd Rankin as Australia won by 281 runs to complete a clean sweep in the series. Harris finished with figures of 3-36 in the first innings and 5-25 in the second innings.