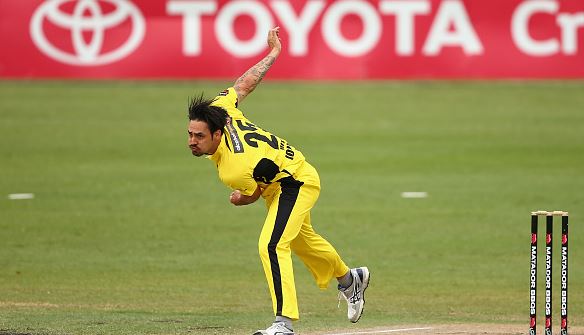 Mitchell Johnson has ripped through the Queensland batting line-up, while South Australia have defeated the Cricket Australia XI to advance to the elimination final against Victoria.

The Redbacks, who needed a win to advance to the semi final against the Bushrangers, won the toss and elected to bat, scoring 5-244 off their 50 overs, before the CA XI were bowled all out for 168.

Tom Cooper top scored with 83, while Luderman scored 50 and Ferguson (35) and Lehmann (32) made useful contributions in the middle order.

In the other match on Wednesday, Western Australia defeated Queensland by 39 runs, thanks to five wicket haul from Mitchell Johnson.

The Warriors won the toss and chose to bat, notching a score of 9-240, before bowling Queensland out for just 201 in the 47th over.

Adam Voges top scored with 81 for WA, while Klinger (48) and Marsh (46) both fell just short of their half-centuries.

Queensland was in trouble early, with Johnson removing Hartley (2) and Khawaja (13) in the opening eight overs, to have the Bulls at 2-23.

Joe Burns and Nathan Reardon then produced an important 94 run partnership, before both batsmen fell in quick succession, after both making 54 runs.

Neser (1) and Milenko (11) then followed soon after and the Bulls were never able to recover, eventually being dismissed for 201 to end their Matador Cup campaign.

Victoria play South Australia in the elimination final on Friday, with the winner to face NSW in the final on Sunday.