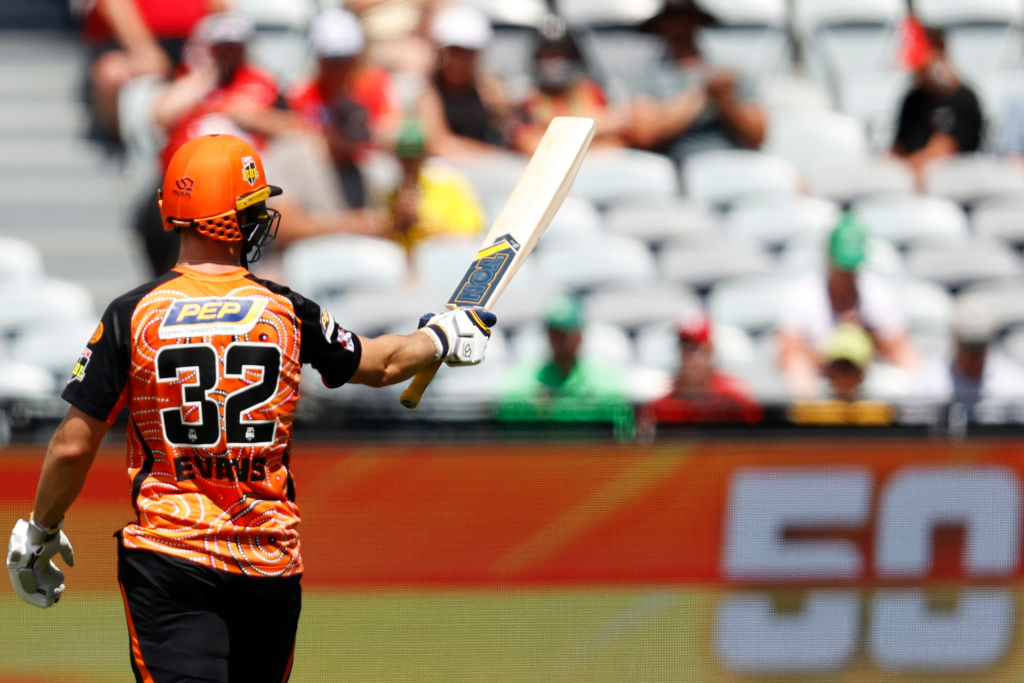 The Scorchers have since terminated his contract.

The Perth-based outfit - who are the most successful franchise in BBL history - had little hesitation in signing Evans again for this summer through the international player draft, using a retention pick to hang onto the star batsman.

Evans, in a statement released by the Professional Cricketers' Association in England, said he was shocked to learn of the result, which was for trace amounts of a banned substance.

"I was shocked to be told that an anti-doping sample I provided in August 2022 tested positive for trace amounts of a banned substance," he wrote.

"I believe passionately in clean sport and I have never taken any banned substances.

"I do not know what caused the positive test, but my team and I are investigating how this could have happened and I am doing everything possible to find out.

"Due to the confidentiality of the process, I cannot say any more at this stage, but I would like to thank my family for supporting me at this very distressing time."

It's unclear at this time whether Evans will be able to continue to participate in cricket, either in England or around the world.

The board in England have a stringent anti-doping code, which also rules out a player being able to use a lack of knowledge as a defence to failing a test.

Under the English code, a two-year ban is the highest possible sanction that can be levelled at a player for a doping violation, although that would be if no mitigation of circumstances if found in the evidence.

The Big Bash League starts on December 13, leaving the Scorchers with just three weeks to sign a replacement player.

The Scorchers said they were disappointed to learn of the news in a statement.

“The club is disappointed to learn of Evans' positive anti-doping test result relating to a sample provided in August 2022,” the statement read.

“Due to the circumstances, the Scorchers and Laurie and his management have decided to mutually terminate his contract for the Big Bash League season.

“The club will explore its options to source a replacement player for the tournament.”

The Scorchers start their season on Saturday, December 17 at home with a grand final rematch against the Sydney Sixers.