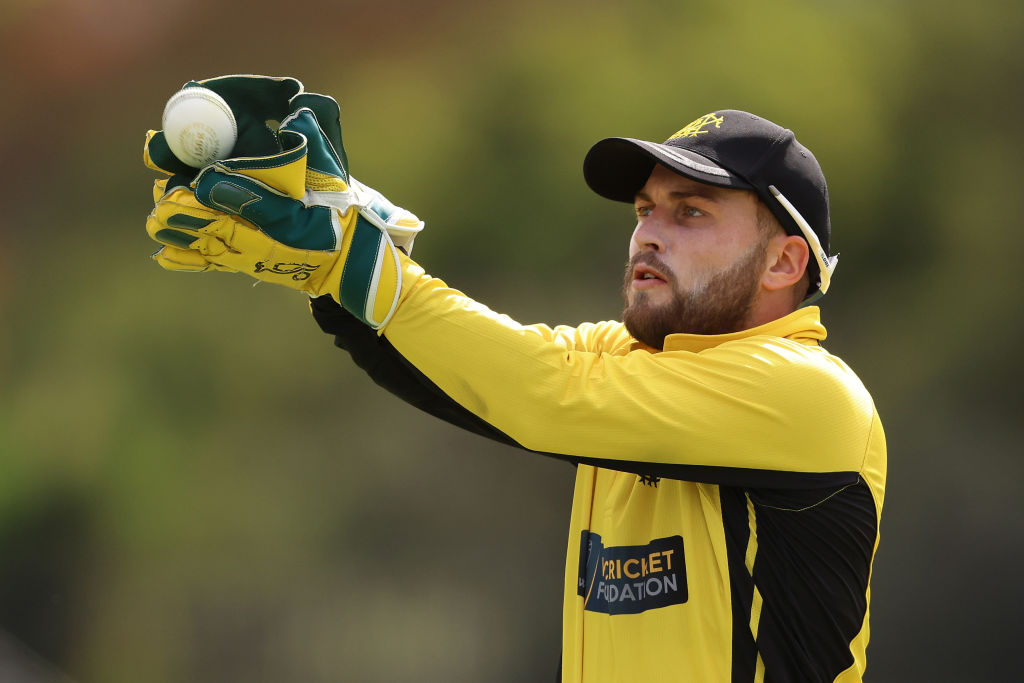 The sudden rise of England-born wicketkeeper-batsman Josh Inglis could be the spark Australia needs in their hunt for the elusive T20 World Cup trophy.

Inglis has been in sizzling form in England and is second to only Marcus Stoinis with the most domestic T20 runs by an Australian over the last two years.

This included scores of 118 off 61 balls against Worcestershire and 103 off 62 against Northamptonshire. On the back of his recent form, Inglis has leapfrogged ODI vice-captain Alex Carey and fellow young keeper Josh Philippe.

The selection of the dynamic stroke-maker could be a turning point for Australian cricket as a lack of depth in the T20 format has been obvious. To put it bluntly, our BBL domestic competition has struggled to produce the calibre of dominant youngsters like India, England and the West Indies.

The large gap between the standard of the BBL compared to T20I has seen players such as Alex Carey, Ashton Turner, Josh Philippe, Riley Meredith, Moises Henriques, AJ Tye, Jason Behrendorff, D’Arcy Short and Ben McDermott miss selection in the World Cup squad after failures against India at home in December, New Zealand in February, West Indies in July and Bangladesh in August.

Below is our batting record in away T20I matches since 2019, it leaves a lot to be desired.

Inglis could be the juggernaut Australia needs to get them out of a slump that has seen them lose their last five T20I. In the defence of the Aussies, they haven’t been able to field their strongest line-up in the last five series, yet it will still be a monumental task to get all the stars aligned before the first game against South Africa on the 23rd of October.

Remarkably, Australia’s firepower has missed substantial periods of T20I cricket. Finch has had to play injured; Warner and Cummins have only played five T20I in the last two years, Glenn Maxwell and Kane Richardson have only played 11 matches, missing the last 10 and Marcus Stoinis, who has been Australia’s leading domestic T20 batsman over the last two years with 1609 runs at 33.52, has also missed the last 10 international matches.

International sides such as England, Pakistan and India have had the ultimate preparation leading up to the World Cup, even during the pandemic.

The 'backs against the wall’ mantra is where Australian cricket thrives, and this World Cup will be no different. They will be playing against the heavyweights in Group A, the West Indies, England and South Africa, who are all in solid T20I form.

Let’s have a look at the squad below and see how they’ve gone in the last two years.

A less than ideal preparation for the T20I captain, Aaron Finch had his first hit last week in Melbourne since he left the West Indies tour with a knee injury.

Finch’s form in the domestic scene has wavered the last two seasons, yet he is Australia’s leading T20I batsman across the last two years, with 595 runs at 35, that should give him ample confidence.

The world’s number one test bowler is about to embark on an interesting month of preparation. Staying at home in Sydney, for the birth of his first child, Cummins will have no warm-up matches before he links up with the rest of the squad in the UAE.

Cummins, who was one of the highest-paid overseas cricketers in the IPL, struggled early with his bowling form, yet unearthed power hitting with the bat which could be vital for Australia if they go with five specialist bowlers.

The sixth rank T20I bowler in the world, Ashton Agar is a crucial key to Australia’s success. Fresh off 2-47 from nine overs in the first Marsh One-Day Cup match of the summer, Agar has been a key cog of the Australian's T20I bowling machine with 29 wickets and an economy of 6.78.

Agar has also taken two five-wicket hauls in the last two years, with 5-24 including a hat-trick against South Africa and an Australian record of 6-30 against New Zealand.

Relatively new to the T20 format, Josh Hazlewood produced good results in Bangladesh, taking eight wickets at a strike rate of 11.7. Since then, Hazlewood has played five games for the Chennai Super-Kings in the IPL as preparation for the World Cup, with six wickets at a strike rate of 20, but a hefty economy rate of 9.30. He may be squeezed out of the first XI, but be certain, he will have an impact at some point.

The only debutant in the T20 squad, Josh Inglis set the T20 Blast in England on fire, with 531 runs at 48.27 and a strike rate of 175.82. Hard to ignore numbers like that, Inglis only made three runs from six balls in his return for Western Australia, but with prior experience playing under Justin Langer at the Perth Scorchers, he could leap-frog Matthew Wade and take the gloves in the World Cup.

Arguably Australia’s most important player, Mitchell Marsh is in the best T20 form of his career, with 375 runs from his last 10 T20I and eight wickets at an economy of 7.26.

Marsh opted out of the opening half of the IPL to rest before linking up the World Cup Squad, he made his return for Western Australia in the Marsh One Day Series and hit a brutal 111 off 124 balls.

Marsh’s middle over bowling could be crucial for Australia if they opt for four bowlers and his batting average of 40.44 from 9 innings at number three, will give Australia a solid platform.

Up there with Marsh as Australia’s in-form batsman, ‘Maxi’ has polished off three consecutive half-centuries for the Royal Challengers Bangalore in the IPL.

What stood out for me was the fact that Maxwell has a strike rate of 157.66 against spin bowling with 216 runs, at an average of 54. Maxwell’s piping hot form at number four against spin-bowling is the crucial key for Australia if they want to claim the trophy.

A key bowler for Australia in the death overs, Kane Richardson opted out of the T20I tours of the West Indies and Bangladesh, due to personal reasons.

Richardson bowled well in his last series for Australia claiming seven wickets from five matches with a solid strike-rate of 12.8. Like Marsh, Richardson has stayed in Australia to prepare for the World Cup and took 2-61 from 10 overs for South Australia last week.

Steve Smith is a curious case in T20 cricket. A player of his immense skill has only averaged 26.19 across the last two seasons and is still trying to find his spot in the order.

Fit after a problematic elbow injury, Smith has hit 152 runs from eight innings at a low strike rate of 112.59 in 2021 IPL season. The Australian selectors could look at playing Smith at number five, but he needs runs on the board. If anyone can put runs on the board, it’s Steve Smith.

Unable to play any domestic cricket leading up to the World Cup, Starc has been in Queensland with wife Alyssa Healy for the Women’s Test against India. Starc’s form was patchy against the West Indies and Bangladesh taking only four wickets at 50.5 with an economy of above eight.

On reputation alone as a damaging opening fast bowler, Starc is a worthy addition to the squad and could provide Australia with much-needed early wickets if he hits form in the practice matches.

Stoinis has been slowly groomed as the middle order finisher for Australia, even though he opens for the Melbourne Stars. He has 238 runs from 10 innings at number five going at a strike rate of 143.37, and a big score of 78 from 37 balls against New Zealand in February, in a 92-run seventh-wicket partnership (an international record) with Daniel Sams.

Stoinis should be fit and firing in time for the World Cup, maybe it’s time we look at him as a specialist batsman and take the ball out of his hands.

Missing the chance to play crucial practice matches for Queensland due to Covid-19 in preparation for the World Cup, Mitchell Swepson has shown enough signs he can be a valuable backup for Adam Zampa.

Swepson, who only played a handful of matches against Bangladesh, impressed with three for 12 and 15 dot balls in Dhaka for the fourth T20I.

The Doctor Jekyll/Mr Hyde of T20 cricket. When Matthew Wade is on, he is sizzling, when he’s off, he is unwatchable.

After two scores of 58 and 80 against India at home, Wade has only made 228 runs at 15.2 from his last 15 innings against New Zealand, the West Indies and Bangladesh. With a strike rate of 122.58, Wade hasn’t been able to provide the same substance we’ve grown accustomed to from him in the BBL.

In his last three seasons of BBL cricket, Wade has hit 1048 runs at 43.67 with a strike rate of 157.83, including 40 sixes. If the Australian selectors go for Wade in the World Cup, he should be swinging like a rusty gate to give Australia any chance of victory.

Not the ideal preparation for the World Cup, the polarizing David Warner has found himself dropped for the Sunrisers Hyderabad side and stripped of the captaincy after only 195 runs from eight appearances and a strike rate of 107.73.

Warner’s last four innings for Australia in T20I have seen him polish off three half-centuries, and many critics should tread with caution doubting Warner’s skill on the big stage after he responded in the 2019 ODI World Cup in England, with 647 runs and three centuries.

Like Starc, Zampa was not selected for the IPL and will have no chances to train with his New South Wales teammates in the lead up to the World Cup. Zampa has played every one of Australia’s last 23 T20I with 24 wickets, an economy rate of 7.77 and a strike rate of 20.79.

Across the last two seasons of BBL cricket, Zampa has the number one bowler taking 39 wickets in only 22 matches with a strike rate of 13.87 and an economy of 7.27. This form, however, has been lacking in T20I and as one of Australia’s go-to spinners, he will need to get that strike rate to at least 16 if he wants to be a constant threat.

Christian has failed to land a blow in the IPL with an average of only 1, with the bat from his last five innings and a bowling average of 93. Running out of time before the World Cup, maybe Australia should have selected rising star Tim David.

A feel-good story for all local fast bowlers, Nathan Ellis went from playing Sydney Grade Cricket to securing an IPL deal with the Punjab Kings in only a couple of months.

Fast-tracked to Bangladesh for two T20Is, Ellis took a hat-trick on debut and finished with five wickets at an average of 10. Ellis will be in the UAE when the touring side rolls in.

Another player who has shown signs of immense talent yet has struggled to find momentum in the IPL.

Daniel Sams’ 40 from only 15 deliveries against New Zealand, is a fair indication of what this cricketer can do when given the chance.

Australia's potential XI for the first World Cup match against South Africa on the 23rd.