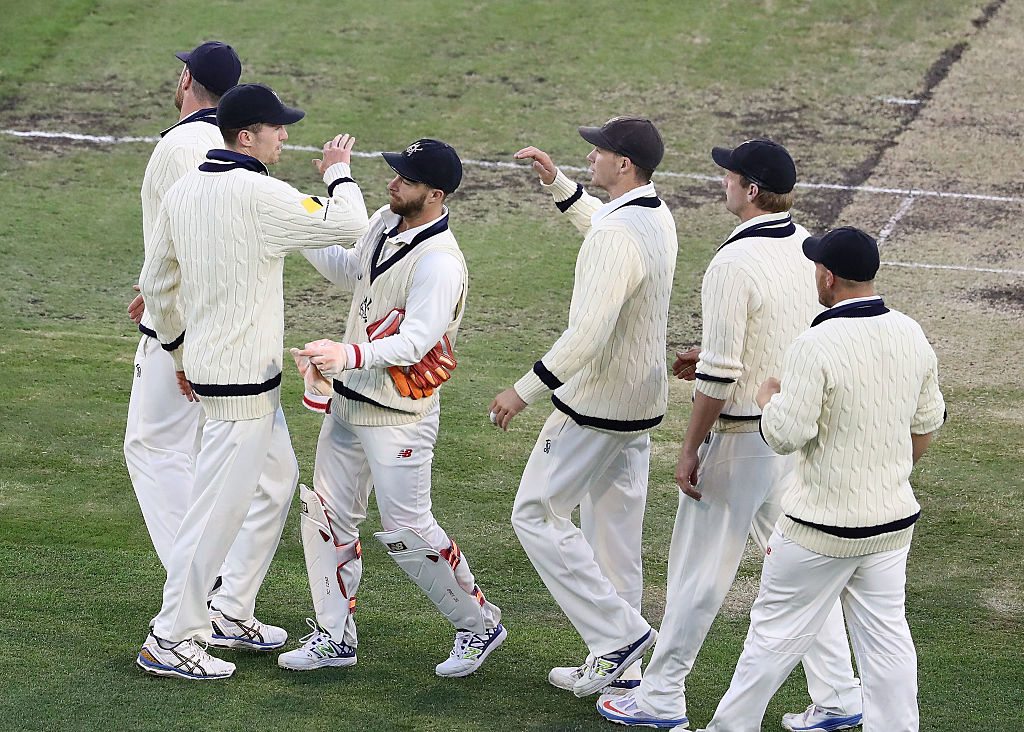 South Australia and Victoria both won quite convincingly during the second round of Sheffield Shield action, with New South Wales getting the better of Western Australia in the other match-up.

Redbacks paceman Chadd Sayers claimed 11-76 in a well deserved Man of the Match performance as South Australia smashed the Tigers to win by an innings and 94 runs.

The result was sealed before tea on day three at the Adelaide Oval, as the hosts dominated from start to finish.

Tasmania were bowled for just 98 in their opening innings, as just four players managed double-figure scores.

South Australia's reply was quite an impressive one, as Jake Weatherald (135) and Jake Lehmann (129*) led the hosts to a score of 481.

Tasmanian captain George Bailey hit an unbeaten 142 as he tried to lead his team to make a comeback, but only three of his teammates again could manage double figures as they fell for 289 to lose their second match of the season.

An impressive bowling performance from spinner Jon Holland led Victoria to a massive innings and 84 run defeat of Queensland at the MCG.

Holland amassed figures of 8-78 to claim Man of the Match honours, as captain Cameron White added an unbeaten 104 as the hosts finished the match before tea on day three.

The Bulls were bowled for 137 in the first innings, which was quite a respectable score given they were staring at figures of 4/11 after just nine overs.

Sam Heazlett scored 51 for the visitors to help steady the ship a touch, but the damage had already been done.

In reply, Victoria got off to a shaky start themselves, after early Travis Dean and Marcus Stoinis wickets had the Bushrangers at 2/8.

Marcus Harris and Peter Handscomb combined for 130 to help Victoria regain the ascendancy, and after Glenn Maxwell added 81 to go along with White's unbeaten ton, the home side were well in control after a first innings total of 417.

Marnus Labuschagne was the lone ranger in Queensland's top order as the rest of his side fell for 5/53 around him.

Labuschagne's 70 was only aided by an unbeaten 34 from captain Chris Hartley, as Queensland fell way short of the total.

The hosts didn't need long on day four to chase down the small total of 96 runs as the Blues won their second straight Sheffield Shield match.

Western Australia struggled to settle themselves at any point during either innings, as NSW's spinners got the best of them.

Steve O'Keefe took 5-65 alongside William Somerville's 4-61 in the first innings, and the pair were at it again during WA's second stint with the bat, as they managed figures of 3-41 and 5-65 respectively.

Somerville's 9-126 were the Kiwi's career best figures as he helped his side to what in the end would become a nervy victory.

Half-centuries from Hilton Cartwright (59) and Ashton Turner (81) in WA's first innings saw them post a respectable 216, but a fantastic 116 from Nic Maddinson saw NSW take an 82 run lead into the main innings break.

Warriors captain Michael Kilnger managed 50 runs during their second innings but help was scarce for Klinger, as WA could only score 177 to set NSW only a double-figure run chase.

Ed Cowan top scored with 25 runs as the Blues almost stumbled to a win, losing seven wickets during the run chase.