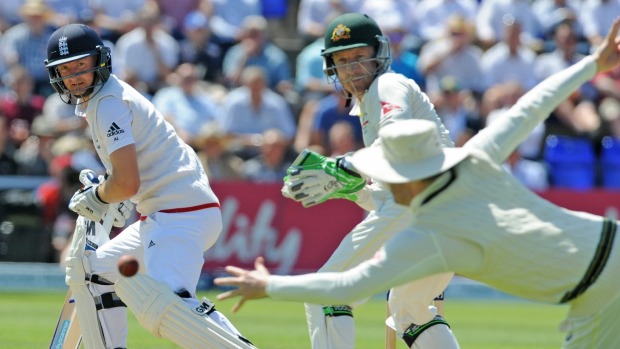 Coming off a disappointing loss to the English in the first Ashes Test, the last thing the Aussie test side needed was a week or more to sit around and contemplate what went wrong.

The best thing that could have happened to the beaten side is to focus on the second Test and get back to what they do best, winning test matches.

Luckily for the Aussies, the second Test match starts tomorrow (Thursday) which has not given them a whole lot of time to over think their plans for the rest of the series.

Simply put, to win the second Test, the Aussies need to bat better, bowl tighter and take their catches.

Sounds simple, but unfortunately Australia let themselves down in the first test. Realistically, the touring side only won two sessions, although if you were being tough it’s fair to suggest the Aussies only won the opening session of the test.

Brad Haddin’s dropped catch of the in-form Joe Root ended up costing the side 134 runs and handed England the momentum.

At the time, the home side were 3-43 and looking far below their best. If Root had been dismissed, England would have been 4-43 and in real trouble.

Despite England’s first inning total of 430 being impressive, it was far from a definite match winning score.

Australia simply did not bat well on a pitch that wasn't exactly full of demons.

Each of the top six batsmen got starts, but unfortunately only Chris Rogers could convert into anything close to a meaningful score of 95.

Steve Smith looked in brilliant touch before playing a lazy shot and falling to Moeen Ali. Each of Voges, Clark and Watson looked well on track to post at least fifties, before falling in disappointing fashion.

Scoring 308 on a pitch that should have seen them equal England’s ability to pass 400, meant they were always going to be well behind in the game.

In the second innings, Mitchell Starc, despite suffering a potentially serious ankle injury, bowled extremely well, as did Nathan Lyon.

Although the target of 412 looked imposing, and would have seen an Ashes record set if it has been reached, the Aussies were never a shot.

Despite an incredible innings from Mitchell Johnson (77) and 52 from Dave Warner, at no stage did the Aussies ever look like they would score anywhere near the required 412 runs for victory.

England bowled very well but the Aussies offered no fight as they went down by 169 runs. If not for Johnson’s late heroics, the win could have been 200+.

In terms of changes, I think all-rounder Mitch Marsh coming in for Watson is a good decision. Marsh’s ability to produce 15-20 overs an inning will come in handy, especially if Starc comes into the Test under an injury cloud.

Shane Watson simply isn’t able to bowl enough to justify his selection. His batting technique has been found out. As soon as England get a ball to straighten, Watson is over the shop and unable to adjust.

If Starc is injured and unable to bowl, one of either Siddle or Cummins will come into the side. Despite rumours of a green top pitch, I would not risk not playing a spinner, especially with Mitch Marsh able to bowl at a decent pace.

The precious, little urn is far from lost, but Australia need to perform at a much higher level if they are to wrestle back momentum in English conditions.

If they bowl well, convert those 30s into 60s or 70s, or even more, and if they take their opportunities, there is no reason why Australia can’t level up the series over the upcoming five days.