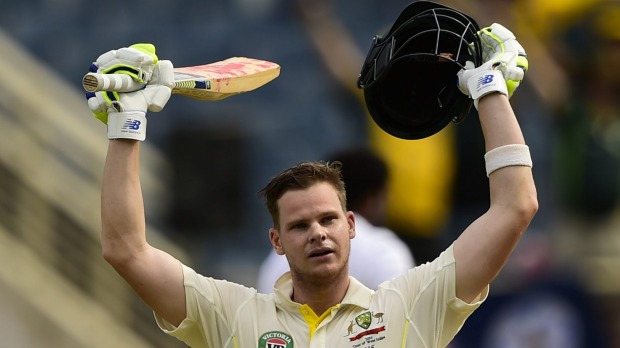 Steve Smith has rescued Australia from a delicate position on Day One of the second Test against the West Indies, with a superb unbeaten century.

Australia finished the on day 4-258, after the West Indies won the toss and elected to field.

Smith was the star on Day One, with an unbeaten 135, after walking to the middle when Dave Warner was dismissed for a duck just three balls into Australia’s innings.

The Aussies then lost a second wicket just four overs later, when Shaun Marsh was sent packing by Taylor, for his second wicket.

Captain Michael Clarke then joined Smith at 2-16, as they went about rebuilding the innings.

The pair raced along to a 50 run partnership and then a 100 run partnership. Clarke’s innings was cut short on 47, after playing a lose shot and edging a wide ball outside off-stump from Jason Holder.

Meanwhile, Smith continued to cruise along, reaching 86 not out at Tea, before notching his ninth Test century shortly after the interval.

However, the Windies were left rueing several missed opportunities on Day One.

Centurion Steve Smith was dropped at first slip on 109, before being given out LBW the very next over, only to be recalled after reviewing the decision.

Jerome Taylor came back into the attack with good effect for the hosts, as he removed Voges for 37 shortly after Smith reached his century.

That brought Shane Watson to the crease, who combined with Smith for an unbeaten stand of 48 before stumps was called on Day One.

Jerome Taylor was the star for the Windies, with superb figures of 3-18 off 15 overs, which included eight maidens.

Amazingly, Taylor did not concede a run in the opening session, bowling six maidens in a row to have figures of 6 over, 6 maidens, 2-0 at lunch.

The West Indies will need early wickets tomorrow, as Australia is now well placed after a shaky start and will resume tomorrow morning at 4-258.