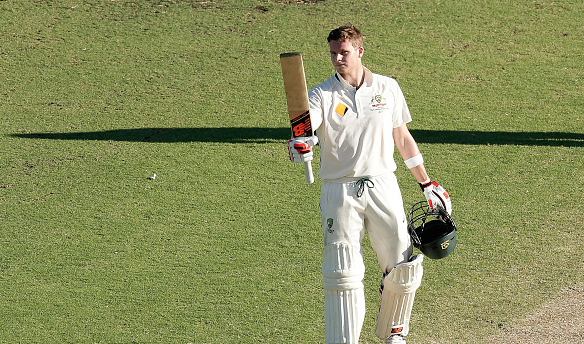 A draw remains the most likely result, but Australia has reclaimed the ascendancy in the second Test against New Zealand thanks to tons from Steve Smith and Adam Voges.

Having bowled the Black Caps out for 624, Australia lost Burns (0) and Warner (24)  before it had reclaimed the lead to be teetering at 2-46.

However, the hosts recovered impressively from there with Smith (131 not out) and Voges (101 not out) putting on an unbeaten 212-run third-wicket partnership to take Australia to stumps at 2-258, a lead of 193 runs.

Earlier in the day the Black Caps finished their dig with a 65 run lead, built largely on Ross Taylor’s 290.

The big Kiwi was the last man out and looked disappointed to have missed out on a triple century, but he will surely be proud of the fact that he is now the owner of the highest ever Test score by a visiting batsman in Australia.