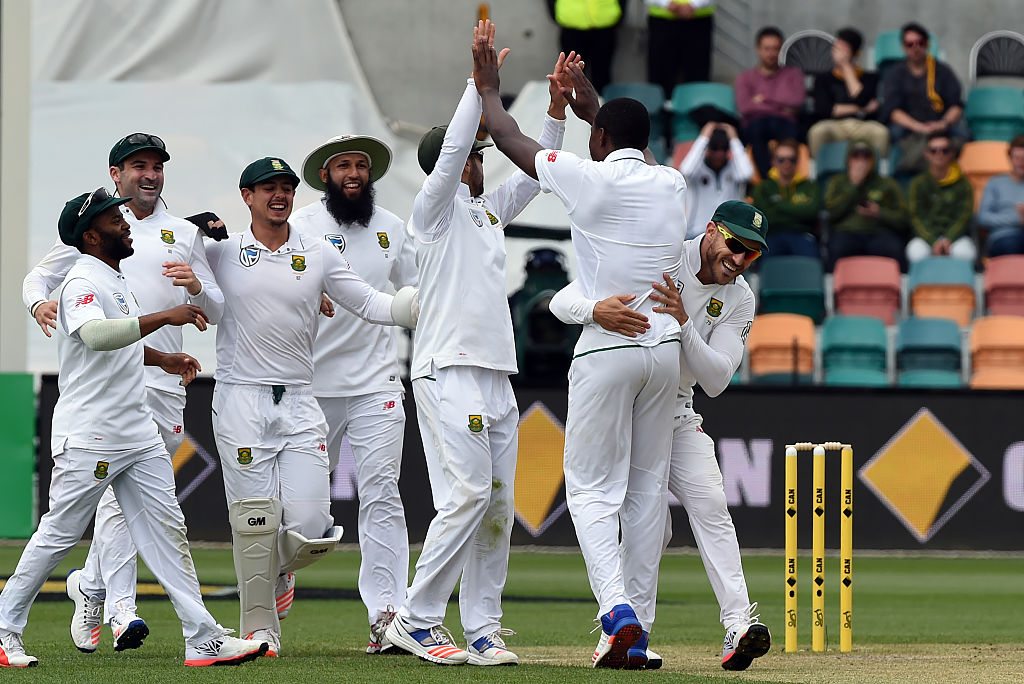 The Proteas have handed Australia another beating, winning by an innings and 80 runs in the second Test in Hobart and claiming the series win with one Test to spare.

Two capitulations in three days of play (rain washed out day two on Sunday) saw Australia have no answer to South Africa's brilliant bowling display, as Vernon Philander, Kagiso Rabada and a Man of the Match performance from Kyle Abbott ripped through Australia's batting line-up during both innings'.

From the opening over of the Test things were going the way of the visitors, as David Warner was dismissed with just the sixth ball of the match.

Joe Burns, Usman Khawaja and Adam Voges followed Warner quickly and were all out inside nine overs, as Australia found themselves at 4/8 and in need of some stability.

Steve Smith was the man to provide that with an unbeaten 48, but unfortunately none of his teammates could stay alongside him as Australia were bowled out for a measly total of 85, their lowest in Australia for 32 years.

Philander was the man to do the most damage in the first innings, taking 5-21 from just 10.1 overs with five maidens.

The Proteas found themselves at the crease earlier than even they would have dreamt, and went on to post what would become an unbeatable total despite some early rumblings.

South Africa struggled a touch early and sat at 3/46 at one stage, but a century from wicketkeeper Quinton de Kock (104) and a healthy 74 from Temba Bavuma saw the Proteas score 326, and take a lead of 241 at the innings break.

The hosts needed to post a massive score in order to have any chance of even drawing the Test, and their innings started in the worst possible way.

Burns was sent back to the sheds with just the fourth ball of the first over, after edging a shot he should of left straight through to de Kock behind the stumps.

Warner and Khawaja put on a decent stand before Warner was dismissed for 45, as Khawaja and captain Steve Smith brought Australia to 2/121 at the end of day three.

The pair needed to put on a big partnership, but in keeping with the series so far, Australia got the exact opposite of what they wanted.

Khawaja was dismissed early on day four, which began another major collapse, even bigger than the one suffered on the opening day.

After Adam Voges joined Smith at the crease at 3/129, Australia lost their next six wickets for just 22 runs, as the hosts couldn't keep out Abbott and Rabada.

Abbott finished the innings with figures of 6-77, after taking the final wicket of Nathan Lyon before lunch on day four.

The paceman finished the Test with figures of 9-118, and astonishing finished with more wickets than Bruns (1 and 0), Voges (0,2) and Ferguson (3,1) scored runs during the second Test combined.

Australia now have nine days to prepare for the third Test in Adelaide, as a few changes now look likely to be made ahead of the day-night Test at Adelaide Oval.