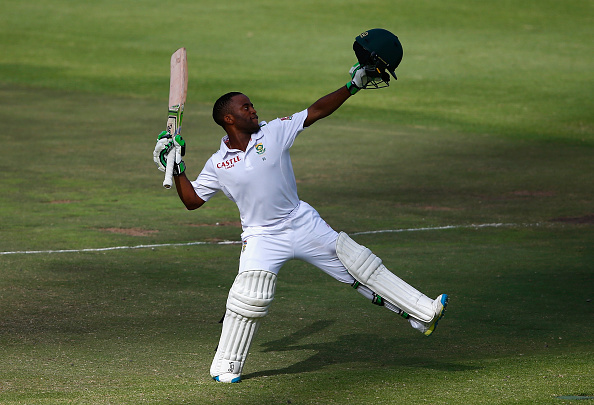 Temba Bavuma has made history by becoming the first black African to score a Test century for South Africa, smashing 102 of 140 balls as the hosts' middle order overcame their struggles in the first Test to make England toil in an emotional day at Newlands.

Bavuma strode to the wicket at the fall of Proteas' captain Hashim Amla's wicket and watched as both Faf du Plessis (86) and Quinton de Kock (5) fell in quick succession, leaving the Proteas fightback in grave danger of falling apart, especially as England had used the third new ball of the innings.

The 25-year-old was joined by debutant Chris Morris and together they launched a counter-attacking partnership filled with brilliant stroke play.

Bavuma's first four scoring shots all crossed the ropes as he quickly moved to his 50 off just 52 balls with 11 boundaries.

With his parents watching in the stands, Bavuma brought up his ton with a thick edge down to third man for another four, perhaps not his most elegant shot of the day, but one that will live long in his memory.

Bavuma said, after the end of the day's play, that his race added significance to his achievement and that he had the potential to inspire many young black Africans, not least those from Langa, the township near Cape Town where he grew up.

"It's a whole lot of pressure to be honest," he said.

"I understand the significance. It's not just me walking on the field. I looked today at the kids playing mini cricket at lunchtime. Half those kids come from Langa and a lot of those kids know my name. When I go back to Langa I know I'll have those kids running around me."

With Temba on 102* Hashim Amla declared the Proteas innings on 7-627 giving England a two run lead, but more importantly allowing his fresh bowlers a crack at the England top-order before the close of play.

Whether you agree with the controversial quota system in South Africa or not, no doubt this was an historic innings.