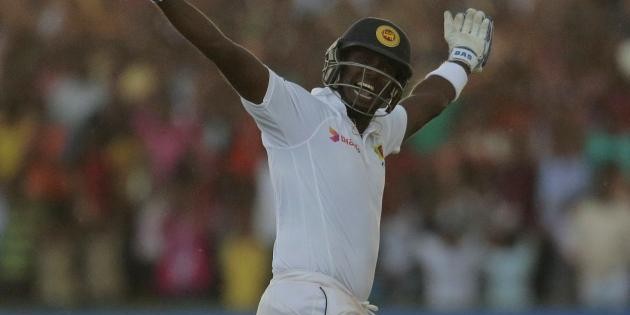 Sri Lanka has completed a comprehensive second Test victory against Pakistan, after making light work of the 153 run target.

Openers Dimuth Karunaratne and Kithuruwan Vithanage got off to a lightening start, racing to 49 within the first six overs, before two wickets fell in two balls. Vithanage was dismissed for 34 off just 23 balls, while retiring champion Kumar Sangakkara was dismissed for a golden duck to give Pakistan a glimmer of hope, with the hosts at 2-49.

Karunaratne and Angelo Matthew then put together a 72-run stand to quash any slim hope Pakistan had, before Karunaratne fell for 50, making it 3-121, with just 32 runs left to win.

Matthews said he was very pleased his team was able to come back and level the series after a 10 wicket loss in the first Test.

"The boys showed a lot of character after that defeat," he said, adding it was important to go for quick runs in the second innings because of the threat of rain.

"We wanted to bat positively because we were not sure about the weather," he said. "We gave the boys the green signal to play freely because it is easy to get bogged down."

Sri Lanka set up the win with a dominant performance with the ball in the first innings, bowling the tourists out for just 138, before scoring 315 in reply.

Sri Lankan seamer Dhammika Prasad was named man of the match for his seven wickets.