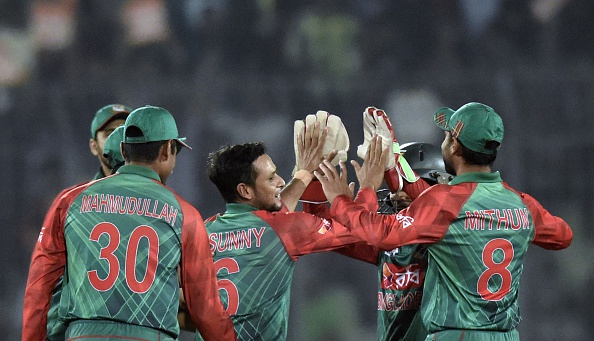 Bangladesh all-rounder Shakib Al Hasan will return for the ODI series against India as part of a 16-man squad for the three-match series, which begins on December 4.

The 35-year-old has not featured in the long white ball format since the South African series in March this year; he also missed the Zimbabwe ODI series in August, citing personal reasons.

This year, Shakib has only featured in six ODIs for Bangladesh and has not been able to perform up to the mark. He has only scored 155 runs with an average of 31 with one fifty under his belt.

"We included Mosaddek in the tour of Zimbabwe for the ODIs as we did not have Shakib. As he returned in the 50-over fold, we opted to drop him," BCB chief selector Minhajul Abedin said.

Middle-order batter Mosaddek Hosain and young pace sensation Shoriful Islam have been dropped from the series, seeking their recent performances. Shoriful has played in 14 ODIs and claimed 19 wickets, but his recent patchy performances have cost him a spot in the team.

After making his ODI debut in the third match against Zimbabwe in August of this year, Ebadot Hossain has earned a spot in the team.

For the two-match, four-day series against their Indian opponents, who will arrive in Dhaka on November 25, the Bangladesh 'A' team has included Shoriful.

"As far as Ebadat is concerned, we want to see how he fares in ODIs, as he has been bowling very well for the last couple of months," Abedin added.

Bangladeshi left-arm spinner Taijul Islam still needs to retain his place in the ODI side after his brilliant performances in Test cricket. In July, the 30-year-old picked up his maiden ODI five-for against the West Indies.

The team did not need a third left-arm spinner, and it seems that management wants to keep the spinner fresh for the red ball leg of the tour.

India is touring Bangladesh for the first time in seven years for three ODIs and a two-match Test series. The ODI series starts on December 4 at Sher-e-Bangla National Cricket Stadium in Dhaka.