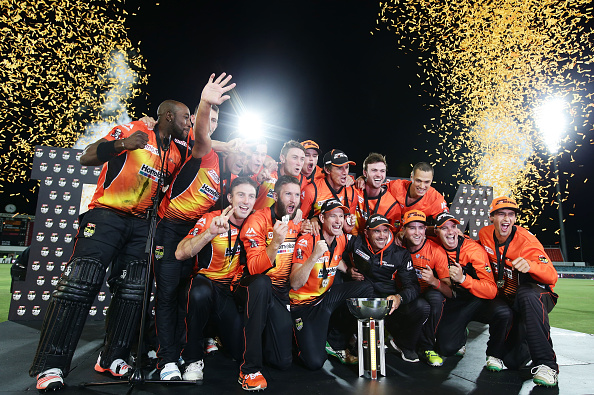 A jam packed Spotless Stadium awaits the opening fixture of this season’s KFC Big Bash league, the next installment of the Sydney Smash.

The Sydney Thunder will be looking to record their first victory over cross-town rivals the Sydney Sixers after throwing away their best opportunity to break their Sydney Smash hoodoo last season.

South African legend Jacques Kallis returns to wear the electric green of the Thunder after winning player of the tournament honours last season.

Mike Hussey has also signed on lead the side in what will be his last Big Bash season.

They now, without any doubt, have the best squad they have ever had at their disposal, despite the fact that speedster Pat Cummins has been ruled out for the entire campaign through injury.

Although they have lost veteran Brett Lee to retirement, they have a side capable of going one further than their 2014/15 finish as runners up.

On paper, these are two of the best sides in the competition, with a very real rivalry that adds excitement to any derby.

As previously mentioned, the Thunder are winless against their gifted neighbours, but list mismanagement has ensured games prior to last season’s thriller were a case of Sixers by how many.

This is a far, far different situation.

Both sides present top orders that would likely be the envy of many other sides. The Sixers top order contains the likes of Nick Maddinson, Michael Lumb and Brad Haddin, while the Thunder have Kallis, Hussey, Watson and the like capable of scoring quickly.

The Sixers batting lineup has scored plenty of runs in previous campaigns and this season looks to be no different, with Silk, Abbott, Henriques, Cowan, Botha, O’Keefe and Carters on their books.

Twenty20 cricket has never been kind to bowlers, but these are two sides with plenty of talent in their bowling ranks.

Test stars Josh Hazlewood and Nathan Lyon are unlikely to be available for the Sixers, as they prepare for the Boxing Day Test.

Even without their stars, the likes of Bird, Abbott, Botha, Bollinger, Henriques and O’Keefe are hardly mugs with the white ball.

Leading the line for the Thunder will be Sandhu, McKay, McDermott, Kallis, Watson, Russell and Ahmed.

The quality that will be on show in this game with both bat and ball, in many cases both, will be absolutely incredible, and a true testament to the quality of the Big Bash.

This is a huge game befitting the of the quality that is expected in this season’s series.

Fireworks are expected and with tens of thousands of runs at all levels of the game on display on Thursday night.

A capacity crowd of over 20,000 is expected, so the atmosphere is certainly going to match the occasion.

I can’t wait for this campaign, and this Thursday night’s game is the perfect fixture to kick things off.

- The Thunder will win their first Sydney Smash this season
- The Sixers will miss the finals for the first time
- All-rounders will play a huge part this season. Gayle, Kallis, and Abbott will lead the way.
- Spinners will play a bigger part in this year’s campaign that in the past.
- Despite the above, I can’t see any bowlers finishing the series with an economy rate under six