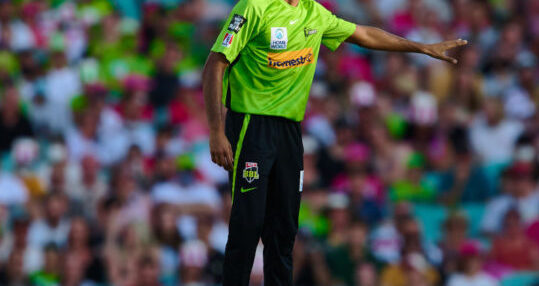 After not getting reward for effort against England and Sri Lanka, the 22-year-old hit back in the side's final game of the T20 World Cup against Australia, claiming 2/29 from his four overs.

Farooqi was one of Afghanistan's best in the Asia Cup in August, taking six wickets from matches, including a brilliant bowling performance against Sri Lanka taking 3/11 en route to a comprehensive eight-wicket win.

Even though he is early in his cricketing career, the man possessing a deadly yorker is making tremendous strides, having represented Afghanistan in seven One-Day Internationals and 17 T20s.

His skill with the ball didn't go unnoticed, getting the opportunity to play in the biggest domestic T20 tournament in the world, the Indian Premier League.

He comes in as a replacement for English left-arm quick David Willey after he and the Thunder reached a mutual agreement to terminate his contract.

Speaking to the team's website, Head of the Thunder Andrew Gilchrist says Farooqi fits perfectly into what the side is striving for.

"He joins the Thunder in great form after playing exceptional cricket in the World T20 Cup and the Asia Cup tournament.

"While it was very disappointing to have lost David Willey, it has opened the door for Farooqi to further enhance his reputation and growing status in world cricket.

"Afghanistan has enjoyed a tremendous representation in the BBL over the years. Rashid Khan has been embraced by Adelaide Strikers and as a genuine superstar and honorary South Australian resident, while others, including Zahir Khan, Noor Ahmad and Mohammad Nabi (Renegades), Mujeeb Ur Rahman (Heat) and Qais Ahmed (Stars) have made their marks.

"We fully expect Fazalhaq will only further enhance the growing reputation of cricketers from Afghanistan being fearless cricketers and extraordinary entertainers."

Farooqi will be available for the Thunder's opening nine matches.