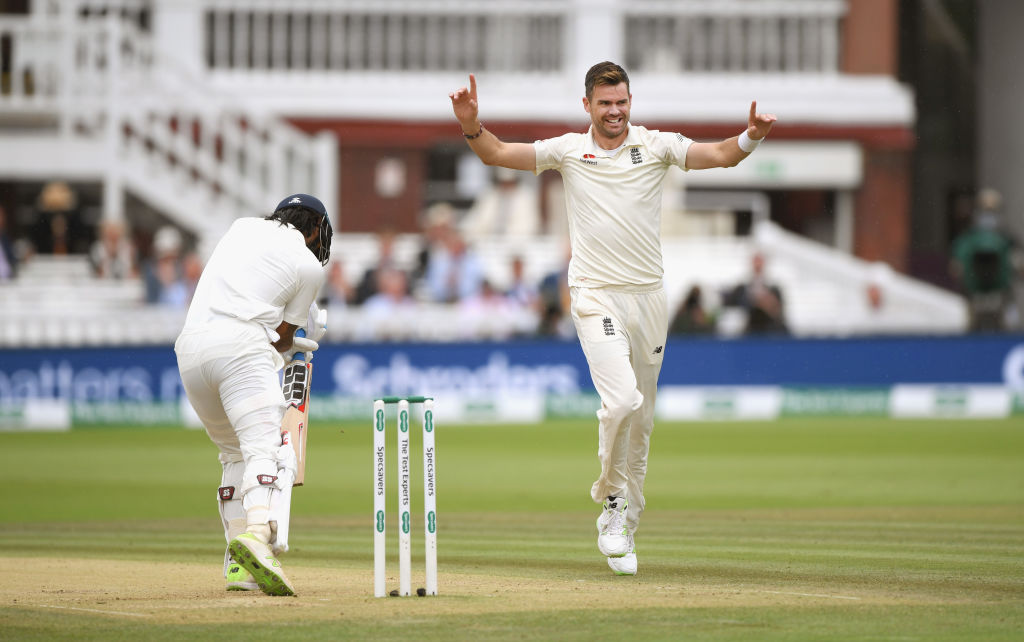 Take a look below and see who made the top 20.

Criminally underrated. Ryan Harris preformed for Australia away from home, kept a tidy average in draws and losses, and was a handful in the second innings averaging 19.93. Harris' second innings feat in the third and final test between Australia and South Africa will go down in history.

Needing 511 for an unlikely victory, South Africa's war of attrition wore down the Aussies. Bowling with a sore knee and five overs to play, Harris provided the breakthrough dismissing Dale Steyn, two balls later he castled Morne Morkel to lead Australia to a famous victory. His figures 24.3 overs, 15 maidens, four wickets for 32 and one bad knee.

The owner of possibly the coolest nickname of all time, Michael Holding was known as ‘Whispering Death' during his career.

The nickname evolved from his long rhythmic run-up, where his feet hovered over the turf like a cheetah. The whispering part was because umpires would often turn around to see him, unable to hear him coming into bowl.

Holding tormented England, and two of their old warhorses Brian Close and Geoff Boycott faced famous spells that have gone down in folklore. His 14 for 149 on a lifeless pitch at the Oval in 1976 became one of the turning points for Windies domination across the next 20 years.

Courtney Walsh waited in the shadows, bowling uphill as Holding, Garner and Marshall feasted on their prey.

As the three eventually retired, Walsh was joined by Curtly Ambrose, and they became the world's most feared opening pair. 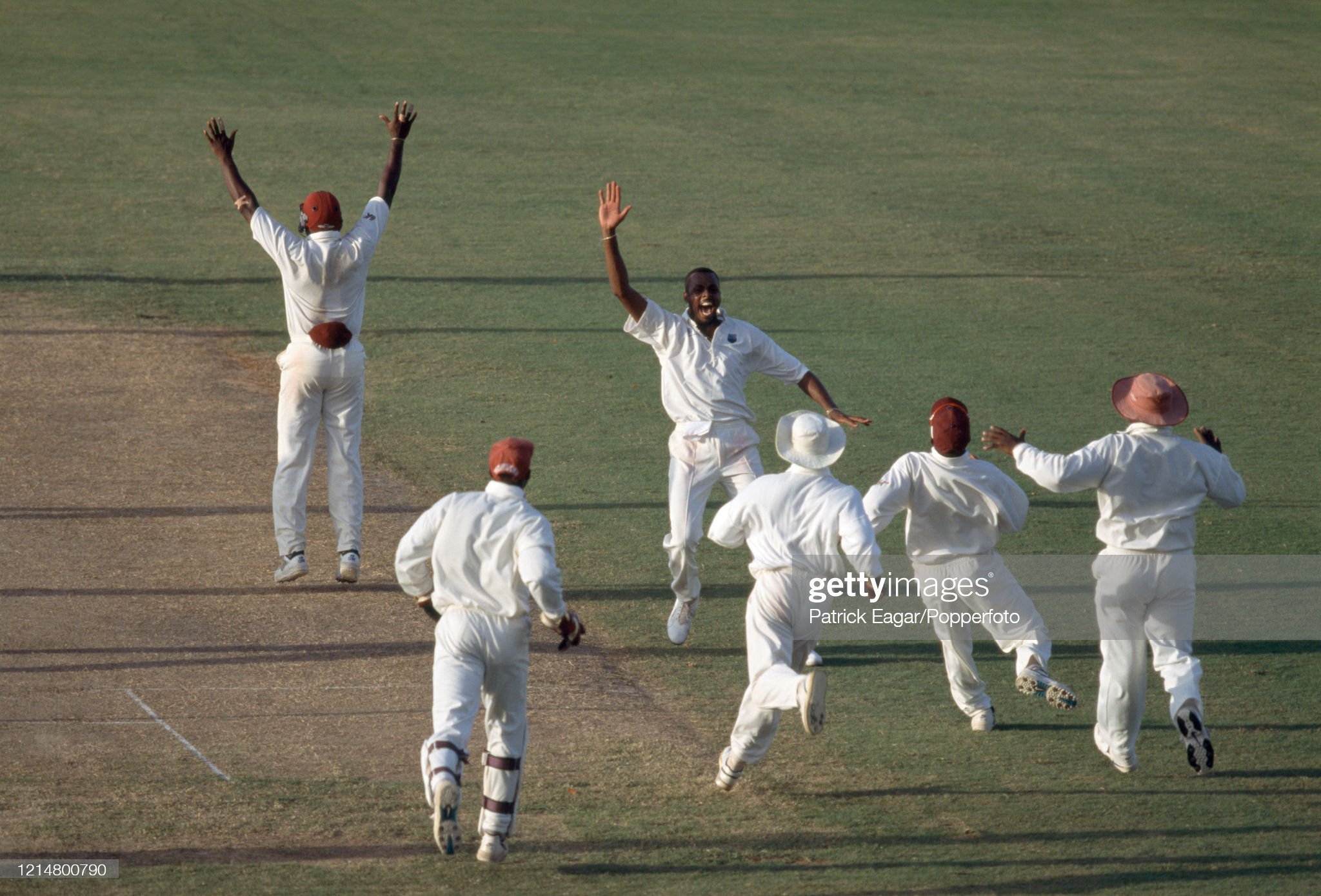 At only 26 years of age, Kagiso Rabada already has 213 wickets. With a strike rate unseen since the 1890s when pitches were uncovered, Rabada became the youngest number one bowler in the world and the youngest to take 150 test wickets.

Rabada even has the potential to move past Donald, Pollock and Steyn as the greatest bowler to come out of South Africa, maybe even in the world.

With a name like Pollock, it'd be hard not to find yourself with a cricket bat in hand from a young age.

Shaun Pollock became a champion fast bowler for South Africa, just like his father Peter. Pollock's immaculate line and ability to swing the ball became the perfect foil for Allan Donald, as they turned South Africa into a powerhouse after the apartheid hiatus. 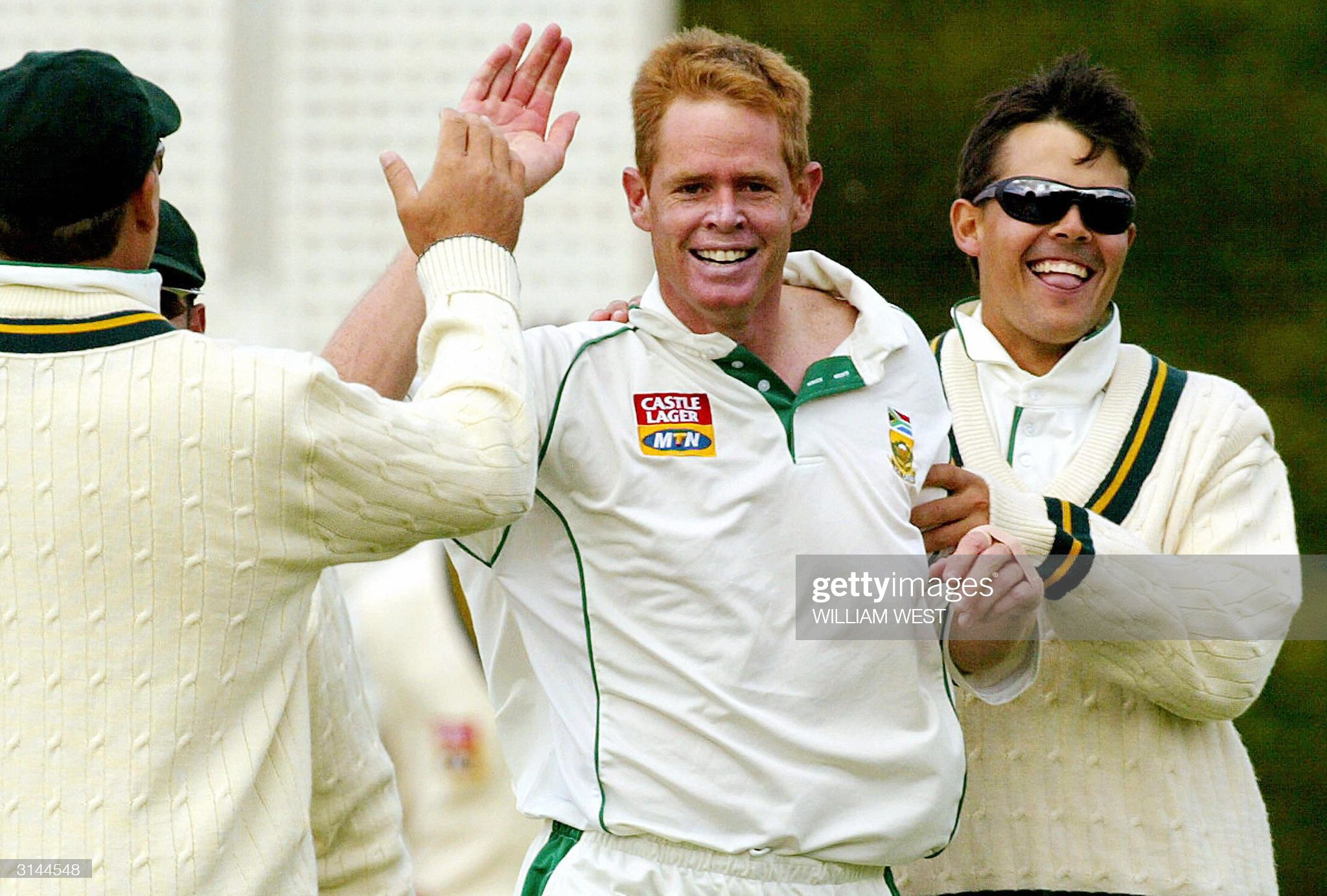 Before there was Anderson, there was Trueman. Bred in the mines of Yorkshire, Fred Trueman was the first bowler in test history to take 300 wickets.

Prone to producing unbelievable spells, on debut he had India reeling at four for zip. In 1961 at his home (Headingly), the Aussies went from two for 182 to all out for 237, ‘Fiery Fred' took five for zero in a 24-ball spell.

Outspoken, comedic and fiery, Trueman would struggle to find a spot in today's PC society, but every cricket side in the world would have him in a heartbeat. 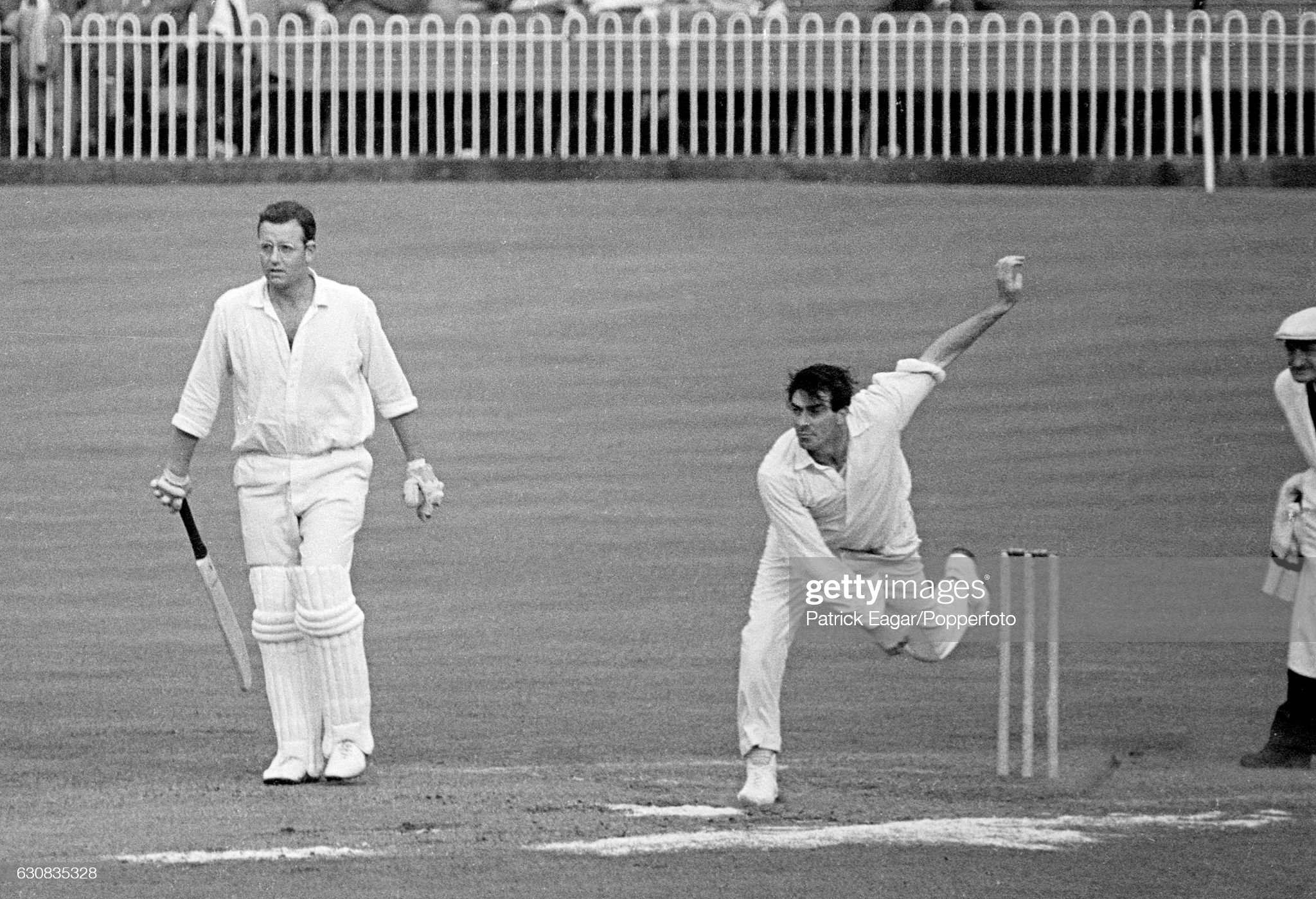 The greatest left-arm bowler in the history of cricket, Wasim Akram possessed everything, and even more.

A complete master at swinging or seaming the ball, Wasim could also change his speed and bowl a mean bouncer. 216 wickets at 22.53 in the sub-continent and 103 wickets at 23.13 in swinging conditions, Wasim could do it all.

Many great batsmen have stated their inability to pick Wasim's ‘Banana Swing' delivery which curved around corners.

The most prolific fast-bowler in test history. Like fine wine, Anderson has aged extremely well taking, in fact, he has taken 364 wickets in 95 tests at 23.86 after his 30th birthday! After a sluggish start to his career (Anderson took 148 wickets in his first seven seasons at 34.86) he has turned himself into the most devastating bowlers ever seen.

Curtly Ambrose didn't need to say anything to scare the batsmen on the cricket field, his stare had even the bravest cowering behind their bat. Rated as the greatest of his generation, Ambrose could generate steep bounce time and time again from a good length. He was also consistent in producing match-winning spells.

The same summer, the Windies toured Australia and most journos brushed the Windies off after the retirements of Richards, Marshall, Greenidge and Dujon. Australia was 1-0 after three tests, when they met in Adelaide.

The Windies set Australia 185 for victory and Ambrose, after taking six for 74 off 28.2, followed it up with four for 46 and the Windies won by a run. The deciding final test at the WACA, Ambrose produced his greatest spell taking seven wickets for one run in a 31-ball spell and the Windies kept the Frank Worrell Trophy. 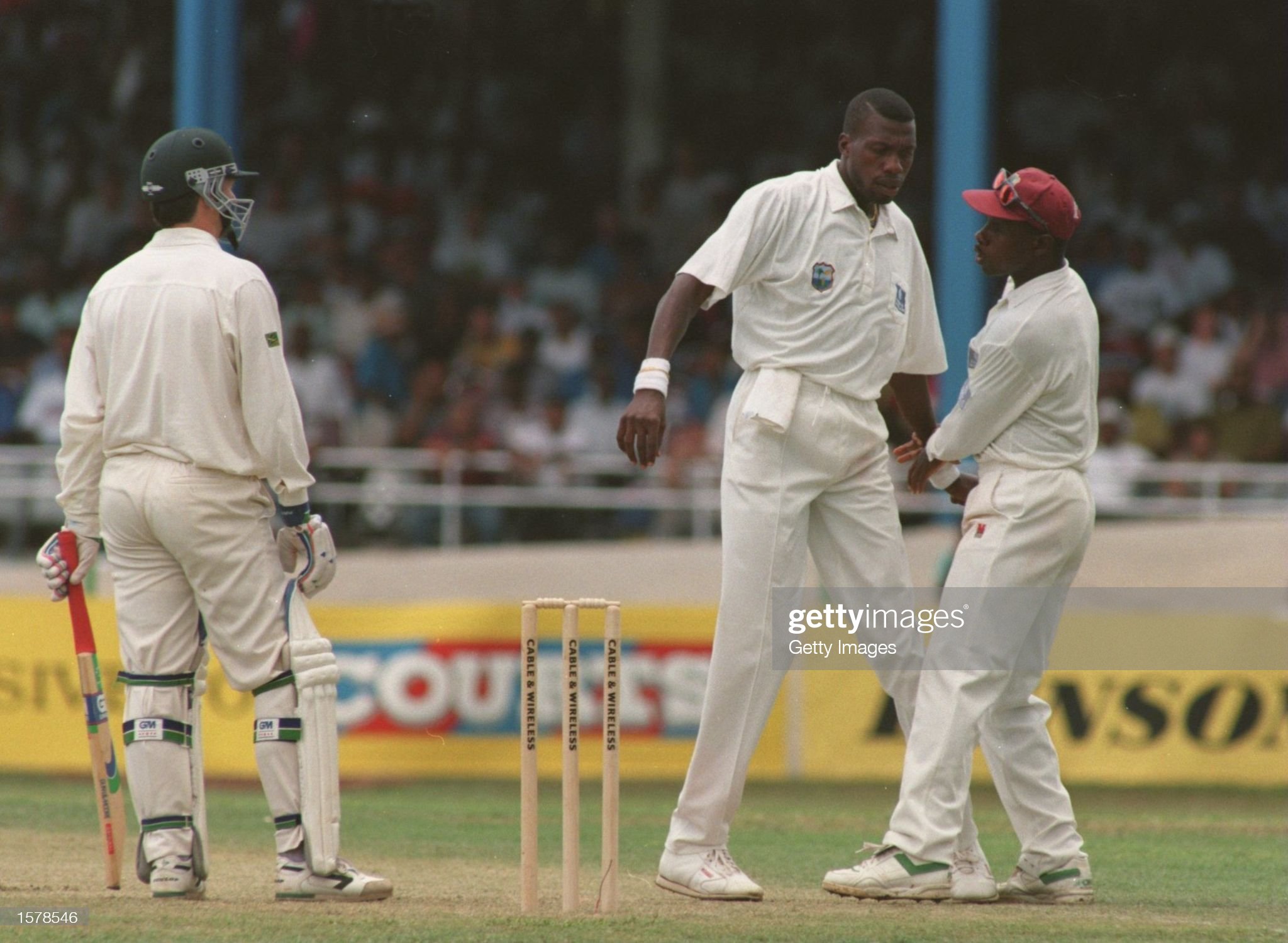 The great ‘DK' is a once in a generation fast bowler. The perfect way to describe Lillee as a bowler would be ‘Lionheart'. Lillee was the man, all Australian captains turned to when they needed a breakthrough.

Lillee burst on to the scene taking eight for 29 against a World XI side featuring, Gary Sobers, Clive Lloyd, Graeme Pollock and Sunil Gavaskar. All these legendary batsmen regarded him the quickest in the world.

Lillee took his form over to England and took 31 wickets at 17.68 in their 2-2 Ashes draw. All was well until he broke down with a spinal stress fracture and embarked on a strenuous rehab that saw him come back slower, but fitter than ever before. Lillee changed his action and came back to destroy England with Jeff Thomson at home and away.

‘DK' then left for World Series Cricket and took 67 wickets in 14 super tests. A credit to Lillee's accuracy and his clever use of swing, he took 146 wickets in his last 29 tests. The only reason he isn't higher on this list is because he didn't dominate the sub-continent.