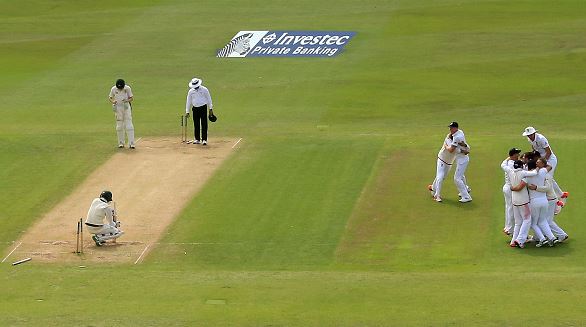 Unfortunately for the touring Australian side, the Ashes have now returned to England, following the absolute pasting the tourists copped in the fourth test.

The side now travels to The Oval and although the series and the urn is gone, there is a chance to salvage some pride.

Given the age and performances of the majority of the Aussie batting line up, I would use the fifth and final Ashes Test to build towards the future.

Chris Rogers has indicated he will retire at the end of the series and deserves a chance to finish on his own terms, especially given he has been the best Australian batsman all series.

David Warner is still very much a big part of the country’s plans and should play in the fifth test, but he has to put that half-hearted, flick, pull shot away.

The shot has led to his downfall in two straight tests, and really has no upside even if it were to come off.

Steve Smith has had a rough series, Lords aside, but has been the world’s best batsman for at least the past 12 months, and is in absolutely no danger of being dropped.

Long-term, I believe Smith should move to number four, or possibly five, where he will captain the side for as long as he wants.

After captain Michael Clarke's announcement that he will retire following the final Test, selectors will more than likely elect Smith as the next captain of the Test side.

Australia’s middle order has been a collective passenger throughout the series and to be frank, is the main reason the urn has returned to the mother land.

Voges, the Marsh brothers and Watson have all failed to make any sort of meaningful contribution in terms of runs.

Shaun Marsh has probably played his last test, after failing to capitalise on a golden opportunity to embed himself in the Test set up.

Adam Voges, at 35 was always going to be a short-term solution and was picked to play a part in retaining the Ashes. His test career looks to be over after just one score above 50 after scoring 130 on debut.

Shane Watson is done as a test cricketer, but still has an important role to play in the one-day set up. I would not consider him for selection for the fifth Test.

Although he has struggled with the bat, Mitch Marsh, at 23, is still a brilliant prospect for the future. He is still young both in terms of years, and cricketing experience and has the talent to play plenty of Test cricket in the future.

He should play in the fifth Test and hopefully he can post a score that will give him the confidence to come back to England for the next round of English-based Ashes Tests and know that he can post a meaningful score.

Peter Nevill will retain his place in the side at the expense of veteran keeper Brad Haddin. The 37-year-old has been a magnificent player during his time at the Test keeper, however his career is winding down and Australia need to build for the future.

You can hardly blame the bowlers for the series capitulation, however Pat Cummins should come in for Josh Hazlewood. He is the country’s best young bowler and although still raw, will provide more aggression and pace than his fellow New South Welshman.

This is how I would have the Aussies line up in the fifth and final test.

1. Chris Rogers – Australia’s best batsman on form. Will retire after the fifth Test, and deserves to go out on his own terms.
2. David Warner – Still has a huge future, but must put the half-hearted flick/pull shot away.
3. Joe Burns – Australia is crying out for a number three batsman to come in and dominate. 25 year-old Burns is that man.
4. Steve Smith (c) – Should captain the side, and should bat at number four for the next decade. The best batsman in the world, but was out playing a horror shot in the second innings.
5. Michael Clarke – Clarke has been arguably our best batsman over the past decade, and deserves a chance to go out a winner and try to win the final Test to gain respectability back.
6. Mitchell Marsh – His form with the bat has not been great since returning to the side, however at 23, Marsh, if good enough, will be there for the next 10+ years. Must improve but must be selected for the future.
7. Peter Nevill – Has shown enough during his time in the baggy green to suggest he is a huge part of future plans.
8. Mitchell Johnson – Has not had anywhere near the impact he did in Australia, but has still bowled well, and has contributed some handy runs. At 33 he may still be in the plans for the next Ashes series.
9. Mitchell Starc – Was Australia’s best bowler in the last Test match, by a long way. Still hasn’t cracked the code with the red ball, but a brilliant young bowler.
10. Nathan Lyon – If Fawad Ahmed was 23, instead of 33, I would definitely call for his inclusion. Otherwise, Lyon is the best spin bowler in the country. There are no other real options right now.
11. Pat Cummins – The nation’s best young bowler. Fast, aggressive and can move the ball. Must play in English conditions with a look to the future.

12th Man: Usman Khawaja – We have to get Uzzy back into the fold, even as 12th man. When Rogers retires, either he or Burns will open, with the other batting at three, or four.

Chris Lynn and Cameron Bancroft should come into future selection, although right now I would bring Burns and Khawaja in from the Aussie A tour.

With 10 days between now and the start of the next Test, that is more than enough time to fly Burns and Khawaja in, have them acclimatise, and mentally prepare them for the fifth Test.

Cummins is already with the squad and must come in.

Clarke, Rogers, Watson, Voges, Haddin and Shaun Marsh have all served their country well, however this is a chance to move forward, and one we must take.