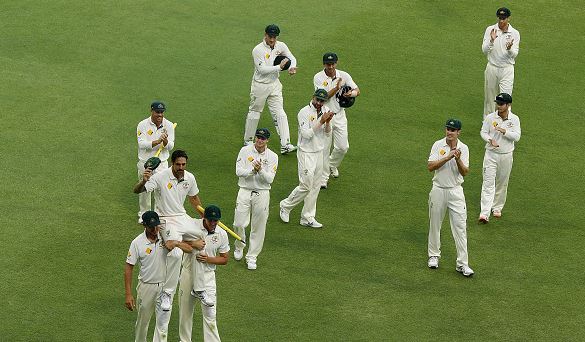 Despite the fact that this year’s WACA pitch was unfortunately underwhelming, with both teams dominating in the batting department, it certainly made for an intriguing test match.

What’s more, with injury to in-form No. 3 Usman Khawaja and the retirement of legendary quick Mitchell Johnson, Australia will have to quickly find their feet and find 100 runs and five wickets an innings out of two new men.

With the weight of expectation off his shoulders, Joe Burns came crashing back down to Earth in Perth.

Innings of 40 and naught reinforced just how quickly a cricketers’ form can depart him, and he’ll be keen to get back on track in Adelaide.

After a sensational personal best of 253 in his first innings, David Warner was dismissed unfortunately quickly in his second dig for just 24.

If he managed even just 50 in the second, he would have easily scored an A+. The fact that he didn’t slightly drags his grade down.

After such an impressive fightback to regain his Test spot, Usman Khawaja unfortunately succumbed to a hamstring injury in the second Test.

He scored an impressive 121 in his monstrous partnership with Dave Warner, but during New Zealand’s innings he was forced off the field and took no further part.

In the first innings it looked as though Steve Smith’s fairly average summer was set to continue, recording only 27 before being caught behind by behind by BJ Watling.

However, when the Aussies had their backs against the wall in their second innings, he responded as any world-class captain should, with an admirable 138, before being caught behind again.

Adam Voges again proved that Test cricket is an old man’s game, being the only Australian to score above 40 in both innings.

Voges’ 41 and 119 confirmed that he is the middle-order batsman Australia are looking for, a solid, 36 year-old rock that can bat Australia out of a tight situation.

Mitchell Marsh was once again a minor player in the second Test, causing many to wonder how long he will be able to hold off James Faulker for the customary all-rounder spot.

While Marsh should and will be given more time to find his way, Faulker is going a long way to closing the gap, and a strong Shield season from the latter will really throw a cat among the pigeons.

Peter Nevill opened his batting campaign for the summer fairly poorly, with innings of 19 and 35 being less than the Aussies would have hoped for given the circumstances.

He also only took one catch for the match, dismissing Doug Bracewell for 12. He will be looking to prove a point in Adelaide.

I was truly disappointed I could not score the great man higher for his last international match of cricket, but three wickets and 31 runs means a C+ is generous.

Congratulations to Mitch on a fantastic Test career, finishing with the fourth-most wickets in Australian history.

Once again Australia’s best bowler, Starc’s four wickets in the first innings was key to keeping a dangerous NZ side to their total of 624.

Josh Hazlewood’s inexperience shone through in the WACA, taking just one wicket against a batting masterclass from the Kiwis.

Granted he may have never bowled on a similar track in his life, but one wicket (as important a wicket as it was) from a fast bowler is simply not good enough. Had Johnson not called time on his career, he may have faced the axe.

Another Aussie who had a standout first innings and was not sighted in the second.

Nathan Lyon got the all-important wicket of Ross Taylor on 290, as well as opener Tom Latham and his fellow opener number Mark Craig.