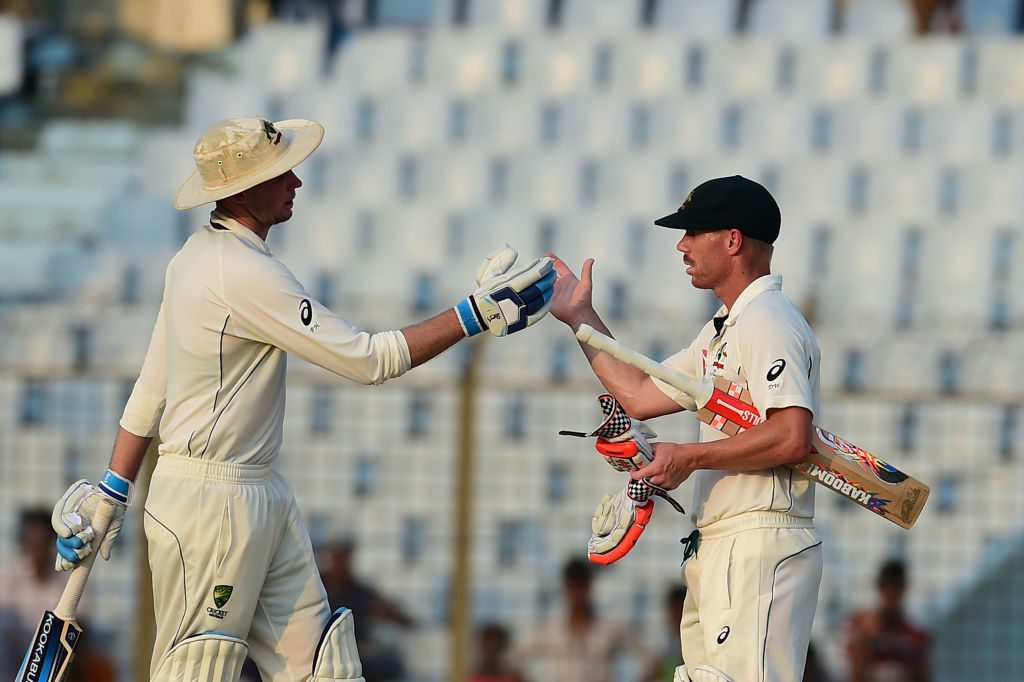 David Warner and Peter Handscomb have battled through oppressive heat to turn the second Test in Australia's favour.

In 40 degree heat in Chittagong, Warner finished day two on 88 not out, while Handscomb is on 69 as the pair put on an unbeaten 127-run stand, helping Australia reach 2-225, just 80 runs in a rears of Bangladesh's first innings total of 305.

Earlier in the innings, captain Steve Smith was removed for 58, while opener Matt Renshaw was dismissed for four in the second over.

Coach Darren Lehmann was full of praise for his batsmen in horrendous conditions, as Handscomb in particular required medical attention as he hit five boundaries in his superb 113 ball unbeaten knock.

“Obviously it’s pretty hot out there, we saw that (on Monday) and you have to work really hard for your runs.

“To get through and the way they played was excellent.

"They’re in the ice baths now and we’ll leave them with the medical team to get them right for (on Wednesday). It was a very special day and hopefully they can kick on.

“It’s really just focusing on each ball and trying to get through. I thought they used their feet really well, playing forward and back, made good decisions and towards the end of the day. It was just about getting through each ball and just take your time. The umpires handled it really well and so did the Bangladesh team to make sure they were right to play.

“They’re in the ice baths at the moment, they’ll be fine, they’re back tomorrow and away we go. They’re just exhausted.”

Earlier Nathan Lyon finished with figures of 7-94, as Bangladesh was dismissed for 305 midway through the first session on day two. Fellow spinner Ashton Agar chimed in with two wickets, while Mushfiqur Rahim top scored with 68.