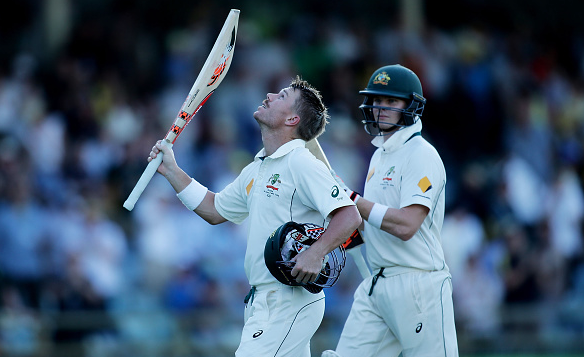 David Warner reached a level only previously visited by Sir Donald Bradman as Australia pulverised New Zealand’s bowling attack on day one of the second Test at the WACA Ground.

Warner finished on 244 not out - equal with Bradman for the second-most runs on day one of a Test match - as the hosts went to stumps on a scarcely-believable 2-416.

It was Warner’s first Test double hundred, which came after he had already passed a string of milestones on Friday including his third-straight Test ton, his fourth in a row against New Zealand and his third at the WACA Ground - the first man to ever achieve that feat.

He and Usman Khawaja, who scored his second century in as many Tests, combined for a partnership of 303 - the highest ever in a Test between Australia and New Zealand - before Khawaja was finally dismissed for 121 by Doug Bracewell shortly before stumps.

The only other wicket to fall on day one was that of Warner’s opening partner Joe Burns who scored 40, before chopping a ball from Matt Henry onto his stumps - but not before Burns and Warner had recorded a third century stand in as many attempts.

Warner will resume on day two on 244, while captain Steve Smith is is not out on five.