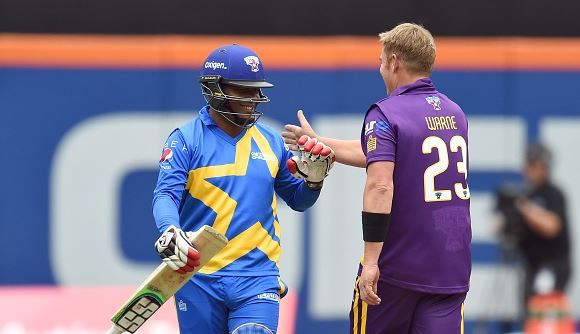 Kumar Sangakkara led an entertaining batting display that has guided Warne's Warriors to a comfortable victory in the second Cricket All Stars match in Houston.

Sangakkara smashed 70 from just 30 balls as the Warriors racked up 5-262 from their 20 overs after Sachin Tendulkar sent them into bat. Kallis scored 45 from 23 balls and Ponting, who was named man of the match, scored an incredible 41 from just 16 balls, with five fours and three sixes.

Sachin's Blasters were never a chance in reply, with Shaun Pollock top-scoring with 55 from 22 balls as they finished with 8-205 to lose by 57 runs.

The Warriors batted first in front of a crowd of around 27,000 at Minute Maid Park - the regular home of the Houston Astros baseball team.

The final game of Cricket All Stars will be played at Dodgers Stadium in Los Angeles on Sunday.