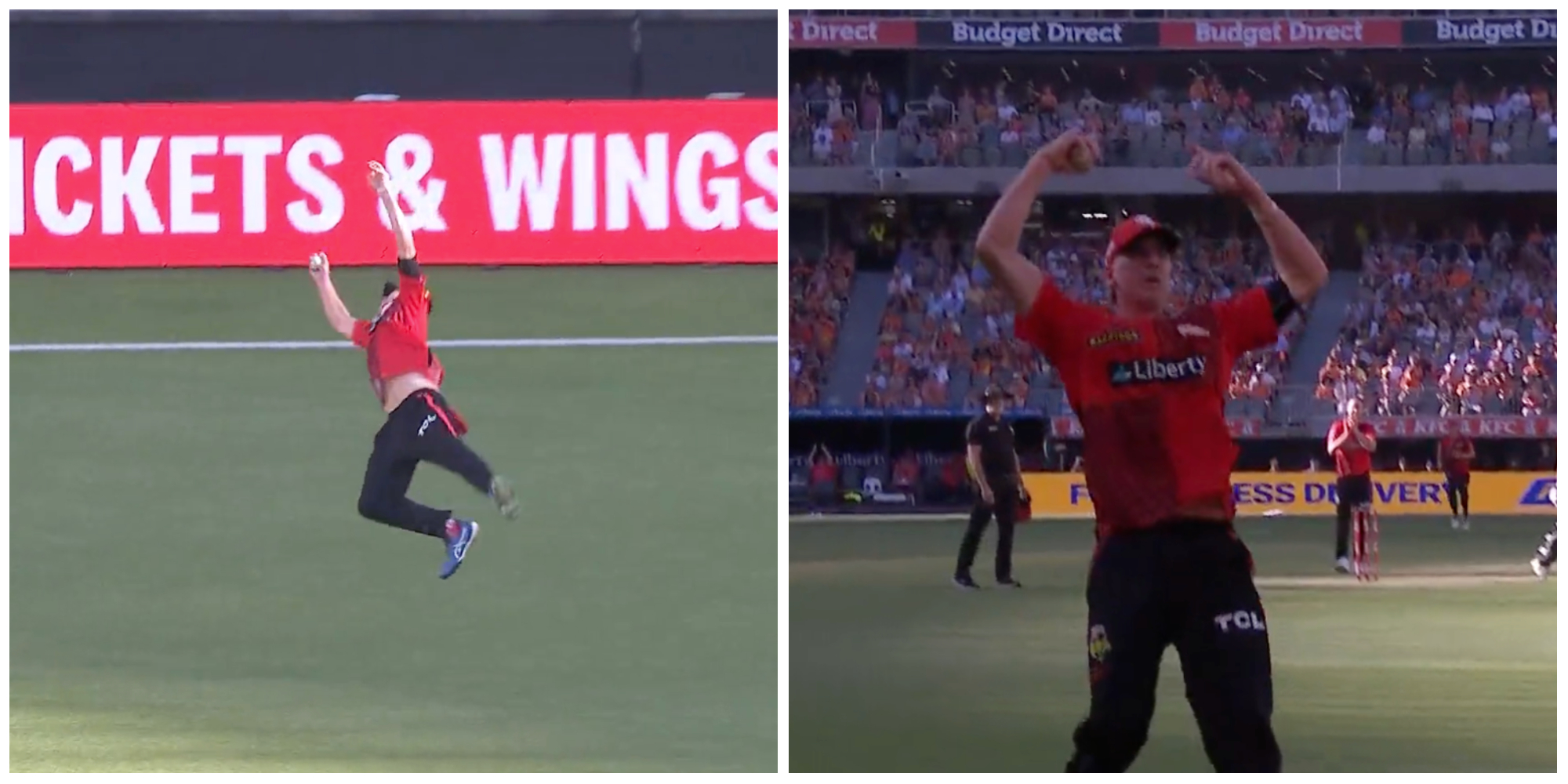 With the Scorchers chugging along very nicely sitting at 4/160 after 16.1 overs, the Renegades were in need of something special.

It all happened when Tom Rogers charged in to bowl a yorker but missed his length by a few inches, providing the left-handed Nick Hobson with a free swing at the ball.

However, the West Australian was unable to get enough on it to get a boundary.

Being the power surge, the Renegades were only allowed two players outside the 30-yard circle, meaning that mid-off, where Will Sutherland was standing, was inside the circle.

At the time, former Australian captain Aaron Finch was on the mic as part of Channel 7's inside access and seemed quite disappointed with how the game had panned out for the Renegades up until that point.

As he saw the ball go into the air, Finch, who was at mid-on, realised the opportunity and the importance of the moment was screaming "back, back, back, back, back" to encourage the all-rounder to continue tracking back to take a catch.

Whether listening to his former skipper's instructions or not, Sutherland ran backwards so far that he ended up close to the boundary.

Then, in hope more than anything else, the 6'5" all-riunder stuck out his right arm at full stretch whilst falling back.

Not only did he make contact with the ball but he somehow managed to hold on the whole way until he hit the turf.

Seemingly expecting him not to take the catch, Finch, rather in shock screamed "oh he's got it" before jumping on his teammate to celebrate with him.

Meanwhile, commentator Alastair Nicholson was sent into raptures exclaiming "he's got it alright" as the Perth crowd looked on stunned.

As most players do when in the spotlight, Sutherland played it cool acting as if he takes one of those every day.

It truly was one of the most special catches ever taken in the BBL and will be hard to beat as the catch of the summer.

Most players wouldn't even get near the ball, let alone catch it.

Unfortunately for the Renegades, Sutherland's heroics in the field and with the bat where he hit 30 off just 18 balls weren't enough to secure the win, going down by 10 runs against the Scorchers.

The Renegades currently sit fourth in the league with just three games for the entire regular season.

They will play their final game against the Strikers at Marvel Stadium on Tuesday night in a game that has huge ramifications for both sides.