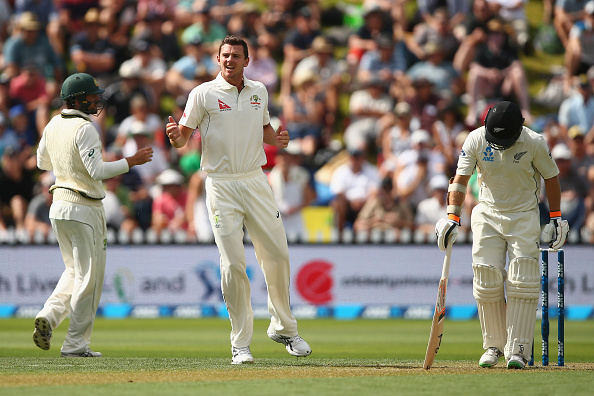 It’s remarkable how quickly Australia's loss in the Chappell-Hadlee Trophy is forgotten.

After the Aussies wrapped up the first Test in Wellington in around three and a half days, the ODI series loss already seems a distant memory.

Speaking of the past, 1997 – almost 20 years ago – was the last time New Zealand lost by over an innings at home.

All things considered, the Australians were fantastic in Wellington, which, for the most part, makes for some pretty impressive grades.

One of two Australian to receive the lowest grade possible, but he has little case for argument given his unimpressive zero off six balls.

Facing the new ball is always tough, especially against the strong NZ quicks. However, on a wicket for a team that put up 562, you would think such a highly regarded batsman would have managed a better score.

Dave Warner usually needs no invitation to key in and take advantage of a batsmen’s wicket. Just recently he managed his highest Test score ever on a pitch not dissimilar to Wellington’s.

However, after just 14 balls and five runs Warner found himself walking back to the pavilion, victim to an identical dismissal that claimed his opening partner Joe Burns.

The first of the Aussie batsmen to really take advantage of what was on offer, Usman Khawaja made another impressive 140.

If you remove the outlier of 56, his most previous Test score to this one, his average for 2015 was 149. Add in this most recent Test score and he has averaged 130 in his last six test innings.

Steve Smith’s batting this year hasn’t been that impressive. In fact, his score of 71 is the highest of his past nine scores in all international matches.

He hardly batted terribly, but one would have excepted more out of the Australian captain.

The man they’re starting to call ‘Bradman’ hasn’t exactly taken to his new nickname well, but there is one thing he’s certainly taken to better than almost anything else of late – Test batting.

Perhaps he should have been out in single figures (perhaps Mitchell Marsh shouldn’t have been out in the last ODI). Either way, Voges is now one of two men to have two double centuries over the age of 35. Imagine if he were selected for Test duties earlier in his career.

Mitch Marsh had a pretty awful first innings – no runs and no wickets and it looked like another disappointing Test for the all-rounder.

Fortunately, he rebounded in the second innings with the ball, taking three wickets, including NZ captain Brendon McCullum.

His batting was not spectacular, his wicketkeeping was decent. Peter Nevill again did his job without being spectacular.

With all the strength in the Aussie batting lineup at the moment, Nevill can afford to just do his job. However, against the Test better nations, his lack of proficiency with the willow may be more telling.

Just three runs short of his highest Test score ever, Peter Siddle chimed in with an important 49 before falling victim to a good ball from his opposite number Doug Bracewell.

He also claimed the important first innings wickets of Kane Williamson and Henry Nicholls as well as Doug Bracewell, showing he can still produce at the highest level if required. Comforting stuff for Australia.

Always taking regular wickets and at the right times, he may very well be the best bowler in the land right now – and he is only 25.

If Josh Hazlewood is not the country’s best bowler right this minute, it is this man, Nathan Lyon.

Three wickets in the first and four in the second innings including the important scalps of Latham and Guptill gives him the highest tally for this Test – again.

Jackson Bird was probably as surprised as any when he was notified he would be playing his first Test in three years. It is possible his nerves got the better of him.

Bird only managed one wicket, but it was an important one. He cleanly bowled impressive debutant Henry Nicholls on 59 – just about the last nail in the coffin for the Kiwis.