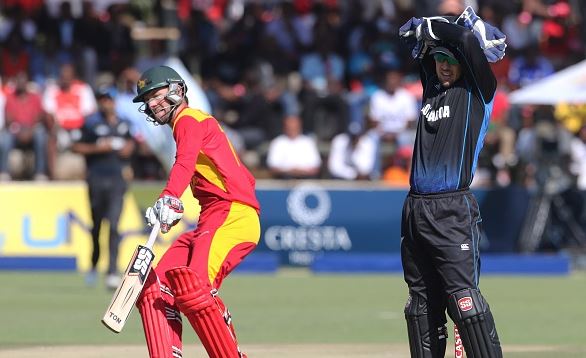 Zimbabwe has recorded a memorable seven wicket win over New Zealand in the first ODI in Harare.

The tourists looked on track to record a big win, with Ross Taylor and Kane Williamson setting up New Zealand's total of 4-303 with a record breaking 10th century stand for the Black Caps.

Williamson fell an agonizing three runs short of his century, while Taylor remained unbeaten on 112 after 50 overs.

Grant Elliot chimed in with a quick fire 43 off 32 balls and Jimmy Neesham made 14 not out.

Zimbabwe had only ever chased down over 300 in an ODI innings on one other occasion, however, they started full of confidence.

Chamu Chibhabha and Hamilton Masakadza shared a 74 run opening stand, before the latter was removed for 42. Masakadza and Ervine then set up the win with a 120 run partnership. Masakadza was eventually dismissed for 84, before Ervine took charge.

Ervine dominated the final 15 overs with his team needing eight an over to win, smashing his way to an unbeaten 130 off just 108 balls, with 11 fours and an amazing five sixes, in his maiden ODI century.

Zimbabwe reached the target of 3-304 with one over remaining, winning by seven wickets.

Spinner Nathan McCullum claimed all three wickets for the Black caps, finishing with figures of 3-62 off nine overs.

The two sides will face off in the second ODI on Tuesday.