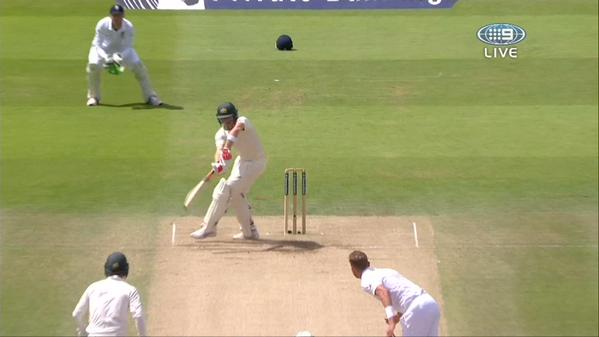 Australia has declared just before the lunch break on day four, with a lead of 508 runs.

After resuming overnight at 0-108, Australia went in search of quick runs as they began setting up a huge declaration total, before declaring on 2-254.

Chris Rogers started where he left off yesterday, hitting a four in the first over of the day to move to 49. However, the opener's innings was unexpectedly cut short just minutes into day four when he was forced from the field suffering from a sudden dizzy spell.

Rogers missed the two-Test series against the West Indies after suffering symptoms of concussion from a blow to the helmet by a net bowler prior to the series.

After Rogers' exit from the field, Warner and Smith continued to work the English bowlers over. Warner was eventually caught by Cook for 83 when he tried to loft Moeen Ali over cover.

Steve Smith continued his brilliant form by following up his 215 in the first innings with a quick fire 58 off 48 balls, before he was bowled by Moeen Ali, when he advanced down the pitch as he tried to aggressively tick the scoreboard over.

Michael Clarke (32) and Mitch Marsh (27) got Australia to 2-254, with Marsh helping the Aussies to a lead of over 500 runs with two huge consecutive sixes down the ground.

Australia then bowled three overs at England prior to lunch, with the hosts reaching 0-7 at the break.

England now face the improbable task of either playing for a draw or chasing down a record target at Lord's with five sessions left to play in the match.

To put the difficult task into perspective, the highest ever successful run chase in Test history is 418 and only five times has a team batted five sessions to save a Test match.